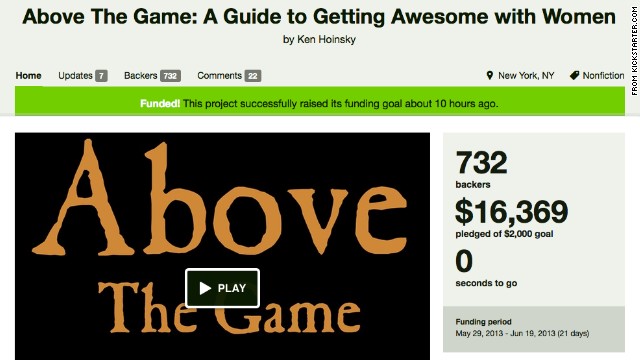 With that, Kickstarter said Friday that it had erred in not moving quickly to remove from its website a request for money for a book that critics described as a guide for would-be rapists.

In a statement addressed to “Dear everybody” and signed “Kickstarter,” the website apologized and sought to explain.

It said that on Wednesday morning, it received a blog post that quoted “disturbing material” found on Reddit that was taken from a draft for a “seduction guide.” The guide’s writer was using the crowd-funding website to raise $2,000 to get his work published.

“The posts offended a lot of people — us included — and many asked us to cancel the creator’s project,” the statement said. “We didn’t. We were wrong.”

“We had only two hours from when we found out about the material to when the project was ending. We’ve never acted to remove a project that quickly.

“Our processes, and everyday thinking, bias heavily toward creators. This is deeply ingrained. We feel a duty to our community — and our creators especially — to approach these investigations methodically as there is no margin for error in canceling a project. This thinking made us miss the forest for the trees.”

Entrepreneurs routinely use Kickstarter to get funding for their ideas and gadgets.

While the effort to publish a book on “getting awesome with women” raked in more than $16,000, it also attracted allegations that it is a guide to sexual assault.

Author Ken Hoinsky describes his work as a book for men seeking advice on interacting with women.

“It is a guide for men to get better with women,” he says in a video that was on Kickstarter but has since been taken down.

In one excerpt, he writes: “The concept of ‘waiting for signs’ or ‘indicators of interest’ was commonplace in older pickup theory. It is 100% garbage and needs to be erased from the face of the planet.”

“From now on you must assume that she is attracted to you and wants to be ravished,” it continues. “Physically pick her up and sit her on your lap. Don’t ask for permission. Be dominant. Force her to rebuff your advances.”

Such comments led some 50,000 people to sign an online petition criticizing Kickstarter for having hosted the project and demanding that the company take it down.

” ‘Disgusting’ doesn’t even begin to describe it: basically, it’s a how-to guide on sexually assaulting women,” the petition states.

“Some of this material is abhorrent and inconsistent with our values as people and as an organization,” it said Wednesday in a statement. “Based on our current guidelines, however, the material on Reddit did not warrant the irreversible action of canceling the project.”

But its Friday statement was contrite: “Let us be 100% clear: Content promoting or glorifying violence against women or anyone else has always been prohibited from Kickstarter,” it said.

“If a project page contains hateful or abusive material we don’t approve it in the first place. If we had seen this material when the project was submitted to Kickstarter (we didn’t), it never would have been approved. Kickstarter is committed to a culture of respect.”

The website said it could not take the money back from Hoinsky. “We missed the window,” it said.

But the website has taken down his project page and, beginning immediately, “we are prohibiting ‘seduction guides,’ or anything similar,” it said.

In an interview with CNN sister station HLN, Hoinsky called Kickstarter’s decision “a wise PR move,” but added, “a blanket ban on all men’s dating advice is going too far. We need public dialogue, not censorship, if we’re going to solve this problem.

“Perception is reality. And thanks to a handful of influential sites sensationalizing a story by using quotes out of context, the perception is that they supported a rape guide. Those who take the time to understand my message know that’s not the case. But that doesn’t matter, the damage is done.”

He had earlier explained his writings this way: “The gist of the controversial advice is, ‘Don’t wait for signs before you make your move. Let her be the one who rejects your advances. If she says no, stop immediately and tell her you don’t want to do anything that would make her uncomfortable.'”

The website said it was donating $25,000 to the Rape, Abuse and Incest National Network. “Kickstarter is one of the friendliest, most supportive places on the web and we’re committed to keeping it that way,” the statement said. “We’re sorry for getting this so wrong.”

Source: Kickstarter: 'We were wrong' on men's guide